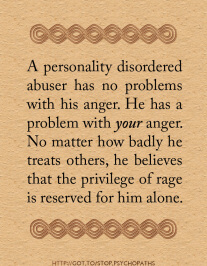 What is “Borderline Personality Disorder”? An unsettling condition to have or be around in most cases, with many undiagnosed people who have it walking around feeling entitled to rage at or otherwise act self-entitled and covertly or overtly abusive to all they meet.

It actually means the person has what most friends and family who love them say is a very erratic, highly domineering, and time-sucking personality — meaning at all times the person controls the tone and tempo of every single conversation they have, leaving no room for the opinions of others or time for anyone else’s needs to be comprehensively met other than their own.

Psychology Today reported on the history of change in the diagnoses of BPD back in 2011. At that time, the DSM was in the process of shifting from the fourth edition of their volume to the latest diagnostic tool, the DSM-5.

The website noted the following diagnostic criteria that had already been in place as well as the proposed changes that have since been incorporated in the manual.

Their reference notes for self-help and relationship analysis is as follows:

The current DSM-IV-TR (2000) criteria for Borderline Personality Disorder is as follows:

A pervasive pattern of instability of interpersonal relationships, self-image, and affects, and marked impulsivity beginning by early adulthood and present in a variety of contexts, as indicated by five (or more) of the following:

(3) identity disturbance: markedly and persistently unstable self image or sense of self

(4) impulsivity in at least two areas that are potentially self-damaging (e.g., spending, sex, substance abuse, reckless driving, binge eating). Note: Do not include suicidal or self-mutilating behavior covered in Criterion 5.

(6) affective instability due to a marked reactivity of mood (e.g., intense episodic dysphoria, irritability, or anxiety usually lasting a few hours and only rarely more than a few days)

A. Significant impairments in personality functioning manifest by:

1. Impairments in self functioning (a or b):

b. Self-direction: Instability in goals, aspirations, values, or career plans.

2. Impairments in interpersonal functioning (a or b):

a. Empathy: Compromised ability to recognize the feelings and needs of others associated with interpersonal hypersensitivity (i.e., prone to feel slighted or insulted); perceptions of others selectively biased toward negative attributes or vulnerabilities.

b. Intimacy: Intense, unstable, and conflicted close relationships, marked by mistrust, neediness, and anxious preoccupation with real or imagined abandonment; close relationships often viewed in extremes of idealization and devaluation and alternating between over involvement and withdrawal.

B. Pathological personality traits in the following domains:

a. Emotional lability: Unstable emotional experiences and frequent mood changes; emotions that are easily aroused, intense, and/or out of proportion to events and circumstances.

b. Anxiousness: Intense feelings of nervousness, tenseness, or panic, often in reaction to interpersonal stresses; worry about the negative effects of past unpleasant experiences and future negative possibilities; feeling fearful, apprehensive, or threatened by uncertainty; fears of falling apart or losing control.

c. Separation insecurity: Fears of rejection by – and/or separation from – significant others, associated with fears of excessive dependency and complete loss of autonomy.

d. Depressivity: Frequent feelings of being down, miserable, and/or hopeless; difficulty recovering from such moods; pessimism about the future; pervasiveshame; feeling of inferior self-worth; thoughts of suicide and suicidal behavior.

a. Impulsivity: Acting on the spur of the moment in response to immediate stimuli; acting on a momentary basis without a plan or consideration of outcomes; difficulty establishing or following plans; a sense of urgency and self-harming behavior under emotional distress.

b. Risk taking: Engagement in dangerous, risky, and potentially self-damaging activities, unnecessarily and without regard to consequences; lack of concern for one’s limitations and denial of the reality of personal danger.

a. Hostility: Persistent or frequent angry feelings; anger or irritability in response to minor slights and insults.

APA Rationale for Criteria B and the Proposed Trait System

C. The impairments in personality functioning and the individual’s personality trait expression are relatively stable across time and consistent across situations.

E. The impairments in personality functioning and the individual’s personality trait expression are not solely due to the direct physiological effects of a substance (e.g., a drug of abuse, medication) or a general medical condition (e.g., severe head trauma).

Again, all this information and more can be found at the APA’s DSM-5 website,www.dsm5.org, with specific changes for Borderline Personality disorder found here.

If you suspect a loved one, co-worker, family friend or neighbor has a personality disorder, be very mindful of using tact and diplomacy when discussing it with them. Staging interventions and taking an abusive personality with you to your personal therapy is not advised in such a case — nor is confronting them in an attempt to cajole them into magically changing their fundamental nature.

While people with Borderline Personality Disorder can learn to manage their own emotional outbursts, many people with co-morbid conditions like Narcissism or an Anti-Social personality type cannot. For that reason alone, armchair diagnosis is simply recommended in order to seek counseling for abuse victims.

People with BPD have the ability to control their emotions but don’t. They choose voluntarily of their own free will to exhibit something called “Narcissistic Rage” with alarming frequency, have the ability to adeptly lie and write revisionist history to paint themselves in a better light, and absolutely know wrong from right.

BPD is typically managed — not “treated” (as it is not technically speaking an illness). It falls under the egocentrism and entitlement umbrella of Cluster B personality types as a generic classification.

Individuals who suspect they have BPD should seek guidance from a licensed mental health professional. Typically, people who have the disorder report an improvement in the functionality of their work and familial relationships when and if they seriously enter psychotherapy and work with a behavior specialist.

Some improvement of personality management has also been reported by medical marijuana users; however, it is important to note that is in steady, modest medicinal doses given to help keep the subject happy, focused, physically relaxed, and emotionally calm.

Alcohol is to be avoided as are mind or mood-altering medications used for recreational purposes as people with BPD tend to struggle with issues of extreme shame, rage, and suicidal impulse. Since all levels of emotion (ranging from rage to depression to elation) tend to be high under normal circumstances, such people quite easily fall victim to various co-morbid addictions.

Drugs, sex, pathological lying, covert and overt manipulation of other people for personal gain with intent to use or harm, and alcohol are the usual suspects with regard to addictive behaviors. However, it is important to note hoarding, pet hoarding, compulsive shopping, a tendency to become serial cheaters, compulsive spending or extreme frugality to the point of social disorders, and gambling are all equally hot topics for these colorful and eccentric personality types.

For that reason, all friends and family members need to discourage acts of impulsivity or excessive behaviors at all times. Minimizing obsessive-compulsive traits while working to help the man or woman learn how to regulate their own social and emotional behaviors is KEY to their ongoing socialization success and their family member’s or peer group’s “Narcissistic Abuse” recovery.

If the person suspected of having BPD is left to their own devices, the older they get the more likely they are to grow violent or engage in passive-aggressive acts that inevitably hurt others during periods when they are unable to functionally control their impulses to sabotage their personal relationships or engage in selfish, short-sighted acts that will ultimately cause that person and those around them direct and traumatizing (potentially lethal force) harm.